Out of Sight, Out of Mind

Yesterday the President's Council of Economic Advisers released its quarterly report on the effects of Obama's stimulus plan, praising it for either saving or creating 3.6 million jobs. The highlights of the report include these claims:


What should we make of such claims? We would all do well to remember that shopkeepers are not better off after having their windows broken. What is missing from the report is any recognition that economic goods, including factors of production, are scarce even during a recession. There is no recognition that the funds spent by the state must be taken from someone.

As I have explained before, government spending can be funded by only three sources: taxes, borrowing, and inflation. Each has negative economic consequences that mitigate any positive benefits reaped by those who get the government money. At best such Keynesian fiscal policy merely robs Peter to pay Paul. In fact, due to the stimulus plan, scarce economic goods are being bid away from their most productive use, so the effects of such government spending is even worse than unhelpful; it is destructive.

We have no reason to believe, consequently, that there has been any net economic benefit from the stimulus plan. Certainly many people did take jobs funded by government money. The economic resources used by the recipients of the stimulus money, however, were merely bid away from their most highly valued alternative uses. Government spending does not create more factors of production out of thin air, it merely allows the recipients of subsidies to have an advantage in the market for factors of production. This actually hinders the adjustment process that needs to take place for our economy to get back to a more sound footing.

Let us not forget that work is beneficial only if actually productive, that is only if it is useful in making something people actually want. Certainly government bureaucrats tossing money hither and yon will stimulate some activity, but if people do a job that is only possible because the state took the money from someone else, this is not productive. This is merely wealth redistribution. What the economy needs are real jobs, and what the government is heralding is the creation of fake jobs.

To the extent that there has been any recovery and any jobs saved or created at all, it is most likely due to an increased saving rate. 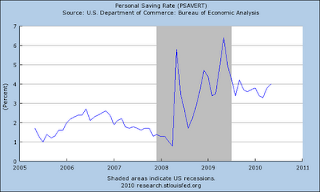 Only real savings leads to capital accumulation, which is what can put us back on the path toward prosperity.
Posted by Shawn R at 11:39 AM