Over at John Stiegerwald's Just Watch the Game, he linked to this post by Exxon which tries to explain the difference between their costs and revenues for the past year. I cannot vouch for the complete veracity of all in Exxon's report. That is not my intent.

One thing that struck me, however, was the claim in the comments section that even if taxed, the corporation never pays it because it passes the tax on to the consumer. This is a common understanding of who pays taxes on businesses. However, the economic reality is not so simple. For businesses, a tax is an additional cost of production in the sense that, in order to sell a good, not only do they incur the cost of producing the good, but in order to sell the good legally, they must pay some money to the state. Suppose, for example, that the state imposes a $1 tax on gasoline, a product previously untaxed. The effects of such a tax can be seen using the graph below: 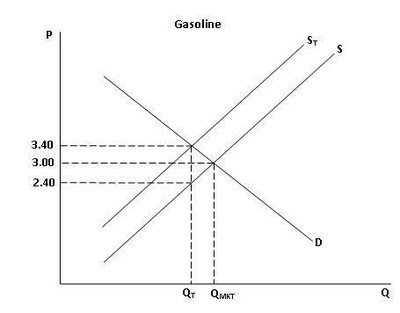 Before the tax the market price of gas was, in this example, $3.00 per gallon and the quantity sold in the market would be QMKT. Because of the increased cost of producing and selling a gallon of gas, sellers' minimum selling price for each quantity increases by the amount of the tax, or $1. Their requiring an additional dollar for each gallon decreases supply from S to ST. Gas stations would try to sell the same quantity QMKT but would not be able because of the law of demand. When assessed a new tax, firms do indeed try to cover that tax by raising prices if possible. The problem they face is that as people are not willing to buy the same quantity at the higher price.

If Exxon or anyone else would attempt to pass on the whole tax to consumers, they would create an excess supply. The quantity supplied would be greater than the quantity demanded. Therefore, the more eager sellers--those sellers who are willing to sell at a lower price--would bid down the price until everyone who wanted to sell can sell. This new price would indeed be above the pre-tax price of $3.00, but below what it would be if the gas sellers could pass on the entire tax to the consumers, $4.00. In the example, demand is such that the price would settle at $3.40. Consumers pay $3.40, but sellers must pay $1.00 of that revenue to the government. Therefore, the selling price they actually receive is $2.40. At this lower price, sellers sell a lower quantity of QT .

The consequences of a tax on gas, then, are these: Consumers pay higher prices for less gas. Sellers receive less revenue per gallon sold, reducing profits. Businesses cannot painlessly pass taxes on to consumers.
Posted by Shawn R at 2:50 AM