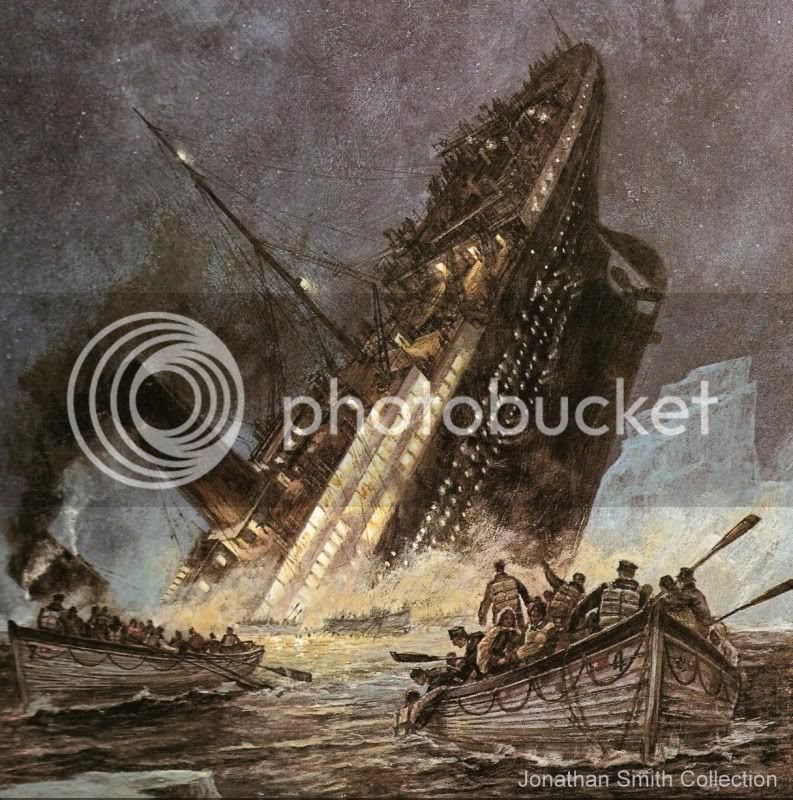 100 years ago this morning the RMS Titanic sank in the North Atlantic sending 1,514 souls to their death. Unfortunately, what many think they know about this tragedy they remember from the 1997 James Cameron film named after the boat. To commemorate the centennial of the event, Cameron's movie has been re-released to mislead another generation of movie goers.

Cameron perpetuates the myth that the tale of the Titanic is essentially a Marxist morality play. In the movie, every single person of wealth is a bigoted, up tight, mean-sprited, money-grubbing snob bereft of the joy of life. Meanwhile EVERY SINGLE poor person who is relegated to third class steerage is a happy-go-lucky, stout-swigging, dance-jigging salt-of-the-earth neighbor who is glad to know ya.

There are so many problems with Cameron's myth that I do not have time to begin refuting them. To that end, I recommend Stephen Cox's article "Titanic Lies" published two years after the big movie. Cox notes that Cameron was not the first to modify the actual history of the tragedy to score political points. Such prevarication began almost immediately after news of the sinking broke.

Cox ultimately hones in on Cameron's version of the myth.

Then there is the 1997 Paramount film Titanic. Like its subject, it is the most expensive vehicle ever constructed; but it is not exactly a vehicle of ideas. Call it a vehicle of impressions, then; and the major impression it conveys is that the Titanic carried two contrasting worlds of humanity--the world of the rich, who were arrogant, stupid, and occasionally homicidal, and the world of their impoverished victims.


The hero is a starving artist who nevertheless (or therefore) understands Life; the equally fictional heroine is a privileged dilettante at war with her social class, among whom she alone appreciates Art, understands Freud, and is frank about Sex. Arrayed against this ideal pair are such hopeless lunatics as Mr. Ismay, who causes the disaster by forcing a reluctant captain to try reaching New York ahead of schedule because he wants Titanic (the largest ship in the world) to attract the attention of the press.

After the speeding vessel strikes the iceberg, Ismay displays stupidity and cowardice, the hero and the heroine courageously exemplify their love, and lifeboat seats are sold to the rich.

What can you do with a boatload of fictions and clichés?

You can look at the facts.


The Titanic was built for the emigrant (steerage) trade and depended on that trade to make money. Her expected competitive advantage came not from her promise of speed but from her promise of comfort and dependability. Her steerage accommodations were regarded as the equal of the first-class accommodations provided by previous generations of North Atlantic steamers. The Titanic's advanced features were the product of late-nineteenth- and early-twentieth-century capitalism's startling progress in meeting the needs of all classes of consumers.

Cox has also written a larger book on the same topic, The Titanic Story: Hard Choices Dangerous Decisions that I highly recommend as well.

While Cox's work is an important counterbalance to the Titanic myth, he does not touch very much on the moral and theological rot contained in the movie. In the character of the heroine, Rose, mentioned above, the film celebrates rebellion against one's parents, and infidelity toward one's betrothed. Rose utters such memorable lines as the one delivered to her fiance after he is rightly angered to find out his fiance has been baring more than her soul to some street artist. "I'd rather be his whore than your fiance," evidently forgetting their is a third alternative. The ever-imaginative Cameron then has Rose and Jack steam up the windows of a car in the hold of the ship while fornicating in the back seat. They have the entire Titanic, the largest moving vehicle of its day, and they do it in the back seat of a car! Indeed a better name for the film would be Tramp Steamer.

One of the things most disturbing about the film is its true-to-Marx philosophical materialism. Never forget the last line uttered by the elderly Rose: "Jack saved me in EVERY WAY it is possible for a person to be saved." How utterly sulfuric. Screwtape could not have said it better. Evidently Rose had forgotten Matthew 1:21 "She will bear a son, and you shall call his name Jesus, for he will save his people from their sins.”

It is a solemn enough occasion to meditate upon the tragic loss of life resulting from the sinking of the Titanic. Alas we are not to be spared Cameron's movie, now remastered in 3-D and even fit for IMAX. This is another sad turn of events, because of the wicked nature of the film. A Tramp Steamer that is ten times the size of the original. Ten times as steamy and ten times as trampy!