Of Gravy and Doughnuts

The government gravy still keeps flowing. On the same day that the Obama Adminstration forecast a record high annual budget deficit of $1.4 trillion (that's trillion! with a tr in front, not a b as in billion), President Obama called for the establishment of a $30 billion small business lending fund. The stated goal of the program "is to make sure the people who are looking for a job, can find it." The idea is that the government would invest $30 billion dollars in community banks who would then find it easier to loan to small businesses. It seems that the official line is that there is no economic problem that can't be solved by throwing billions of dollars at it.

It's understandable why the Administration might be advancing this particular policy. It is pretty clear from the data that the Great Recession was accompanied by commercial lending falling off a precipice. 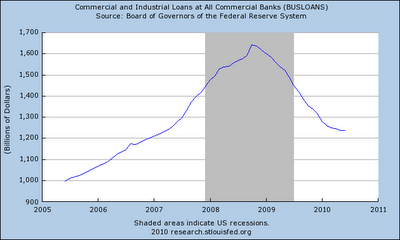 Don't forget, however, that if commercial lending collapsed dramatically (although note that it is still greater than in mid-2006, not all that long ago), there is a reason for it. One thing holding lending back is the current regime uncertainty I've discussed before, fostered in part by the very budget deficits and government debt to which this program contributes. Another is the fact that massive malinvestment during the 2000s resulted in large scale capital consumption and financial institutions are still working on rebuilding their capital.

No matter how much we'd like it to be otherwise, capital cannot be created out of thin air. Capital goods don't come into being by clicking our ruby slippers together and chanting "There's no place like D.C. There's no place like D.C." No, capital must be accumulated through the allocation of real savings. Government loans and subsidies to small businesses merely give them the ability to bid the ownership of such goods away from their most highly valued use. It does not add to the capital stock, it merely redistributes the existing capital stock. We should never assume that investments made possible only due to government subsidies will wisely use the capital invested.

A case in point is the story of how the lives of inhabitants of a small Iowa town were forever made more dismal due to our friends at the Small Business Administration who were there to help. Many years ago this town had a lively doughnut shop that was one of the townspeople's favorite meeting places and served the best glazed fried cinnamon rolls on the planet. The firm maintained a profit because in addition to the retail shop it also daily serviced a very large account at the town's largest employer.

One day a businessman who owned a doughnut shop somewhere else received an SBA grant to also operate a wholesale doughnut bakery in town. Because of the grant, he was able to underbid the established firm for the account at the large employer.  He won the bid and the other doughnut maker had to close up shop. A couple of years later the SBA grant to the second doughnut maker ran out and he was not able to profitably operate either. He had to shut down and the little town in Iowa was left with only holes where the doughnuts used to be. The moral of this true story is that whenever government intervenes with commercial subsidies, resources are misallocated from the point of view of society. Scarce land, labor, and capital goods were used less efficiently than they would have been without the intervention, and the community was left worse than before the government stepped in to support commercial activity.
Posted by Shawn R at 7:00 AM