With the number of officially poor Americans jumping last year to the highest it has been since 1959, no doubt attention will be turned again to questions of what we can do to alleviate this problem. 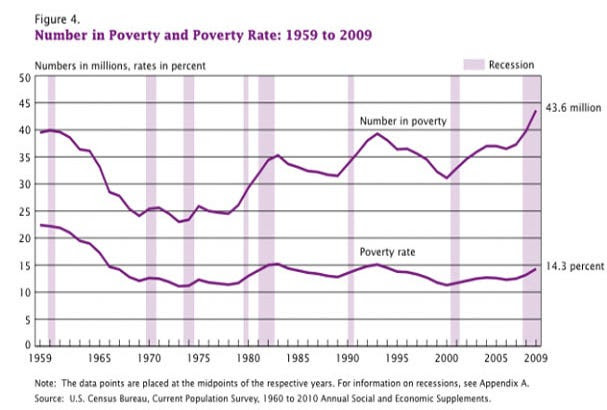 Christians are right to have compassion on and be quick to truly help the poor. A key modifier in the previous sentence is "truly." Too often, professing Christians act as if the chief problem of the poor is merely material in nature. Like everyone else, however, the chief problem of a person who is poor is the same problem as those living in plenty. Without Christ we are lost in sin and are spiritually poor.

Nevertheless, God clearly expects us to minister to our poor neighbor materially as we have opportunity. God tells us that one who considers and is generous to the poor is blessed (Ps. 41:1; Pr. 14:21). On the other hand, whoever oppresses or even mocks the poor insults God (Pr. 14:31; 17:5). God promises poetic justice to the man who closes his ear to the cry of the poor by refusing to answer him when he cries to God (Pr. 21:13). We are called to defend the rights of the poor and needy (Pr. 31:9). Through the prophet Isaiah, God rebukes his people in Judah and Jerusalem for devouring the spoil and grinding the face of the poor (Is. 3:14-15).

Not surprisingly, many people, Christians included, think that to help the poor we must support and advance the welfare state, because only then will there be a guaranteed safety net that is ready to assist in poverty reduction. As I tell my students, however, there are two questions that need to be answered in the affirmative before we support any economic policy: 1) Will it accomplish its goal? and 2) Is the policy ethically sound?

Kel Kelly provides much food for thought as we consider whether the welfare state actually reduces poverty by helping the poor. As he points out, there are grave problems with the welfare state that keep it from accomplishing the stated goal of its advocates. Regardless of the intentions of the promoters of the welfare state, it works to institutionalize poverty by promoting idleness and punishing productive activity. It further results in capital consumption because it hinders saving and investment.

There are also ethical problems which cause us to negatively answer the second question as well. While it is indeed charitable to materially assist our neighbor who is truly poor, it is not charitable to force someone else to do it at the point of a gun.
Posted by Shawn R at 6:00 AM