Inflation and Government Spending Do Not Provide Prosperity

Keynesian macroeconomists regularly call for increased inflation and/or increased government spending to "jump start" an economy in the doldrums, puting us back on the yellow brick road toward the Emerald City of economic prosperity. Paul Krugman recently advised that "the best thing government could do to help business would be to spend more, increasing demand." There are good reasons to believe that such policy, however, is unfounded. At best inflation merely raises overall prices, lowering the purchasing power of money, leaving us no better off. We have more money, but pay higher prices, so we are not able to produce or consume more. In fact, inflation is destructive because the money supply is increased through banks extending credit by artificially lowering interest rates, thereby, stimulating malinvestment, which is what got us into all this economic trouble to begin with.

At the same time increased government spending is merely government consumption, so scarce economic goods are allocated according to government dictate as opposed to their most highly valued and productive use. Therefore, we have no reason to believe that the state can either inflate or spend our society's way to prosperity.

We find this born out by the economic history of the last decade. If you think that government inflation and spending yields prosperity, surely Americans should be earning vastly more than they were a decade ago. That does not seem to be the case. Over the past decade, the Federal Reserve has overseen massive inflation. From 1999 through 2009, the money supply more than doubled, increasing 139%. 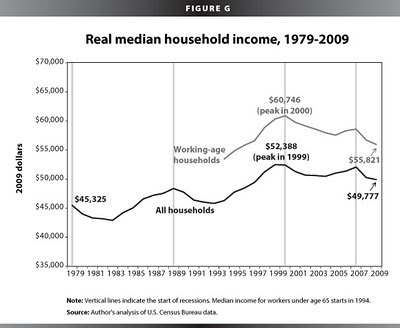