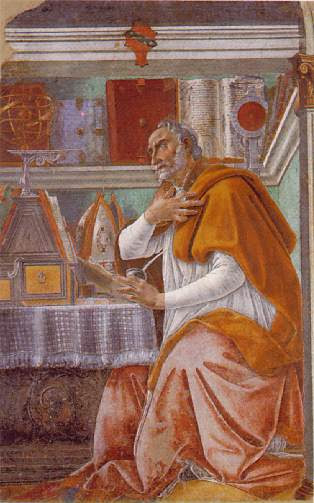 According to Chambers' Book of Days, Saint Augustine of Hippo was born on this day in 354 AD . He is now well known for being a father of the Church and author of The City of God. A friend and colleague of mine recently drew upon his De Doctrina Christiana while investigating the "Dangers, Delights, and Dead Ends" of Christian scholarship.

In his magisterial history of economic thought, Murray Rothbard explains that Augustine was an early Christian source of some important ideas that under gird sound economic theory. Rothbard notes that in Augustine we find the roots of subjective value theory. Augustine recognized that people valued goods because they helped satisfy their subjective needs, not because of  any objective criteria. Augustine was also the first Church father to take an explicitly positive view of the merchant, noting that he provides the service of transporting goods over sometimes great distances to sell to buyers and therefore earns is remuneration. On this point, Augustine appealed to the teaching of Christ when he said "The laborer is worthy of his hire." Augustine further noted that any fraud or deceit that takes place in commerce is not in the nature of commerce itself, but is, rather, a product of sin.

Augustine also was a defender of private property, noting that rulers are not allowed to violate God's moral law merely because they are rulers. When the state acts to take what is not theirs to take, they are every bit as guilty of theft as a common thief. In a relatively well-known passage from The City of God Augustine explains:


Justice being taken away, then, what are kingdoms but great robberies? For what are robberies themselves, but little kingdoms? The band itself is made up of men; it is ruled by the authority of a prince, it is knit together by the pact of the confederacy; the booty is divided by the law agreed on. If, by the admittance of abandoned men, this evil increases to such a degree that it holds places, fixes abodes, takes possession of cities, and subdues peoples, it assumes the more plainly the name of a kingdom, because the reality is now manifestly conferred on it, not by the removal of covetousness, but by the addition of impunity. Indeed, that was an apt and true reply which was given to Alexander the Great by a pirate who had been seized. For when that king had asked the man what he meant by keeping hostile possession of the sea, he answered with bold pride, “What thou meanest by seizing the whole earth; but because I do it with a petty ship, I am called a robber, whilst thou who dost it with a great fleet art styled emperor.