What Has Quantitative Easing Wrought? Dollar for Dollar

American and Australian dollars trade one-for-one at Hullubullu stores in Newtown. This is because Australia's central bank is thinking of slowing the rate of growth in Australia's money supply while ours is doing everything it can to increase the supply of U.S. dollars. It is the great American dollar devaluation. This news comes, somewhat ironically at the same time the U.S. government is agitated at China's alleged devaluation of its currency in an effort to gain a trade advantage vs. American producers. 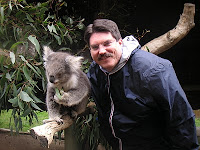 This is exactly what we get for the Fed increasing the U.S. money supply faster than other central banks increase theirs. This is the sort of inflation that Bernanke delights in.
Posted by Shawn R at 2:00 AM