Based on the political analysis of John C. Calhoun, Murray Rothbard pointed out that the government budget divides the citizenry into two classes: tax payers and tax consumers. Tax payers are those who pay more money in taxes than they receive in government subsidies. Tax consumers, on the other hand, are those who, even if they may pay some of their income back in taxes, receive more money from the government than they pay in taxes. It should be obvious who lives off whom.

Now James Cooper reports that for the first time since the Great Depression, "households are receiving more income from the government than they are paying the government in taxes." 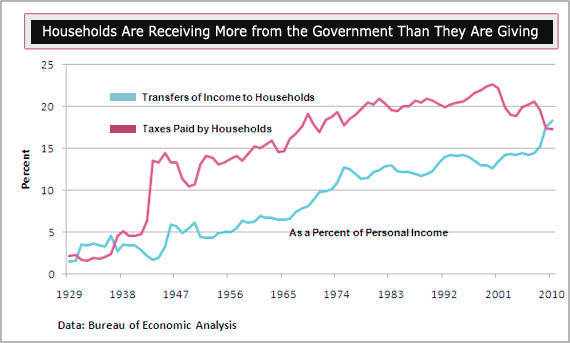 Given this reality, it is no wonder that the recent "historic" budget deal was smoke, mirrors, and actual savings of only about two day's worth of borrowing. When a majority of citizens are tax consumers, any real budgetary reform, such as actually cutting, let alone eliminating, entitlement programs becomes much more difficult politically
Posted by Shawn R at 2:00 AM