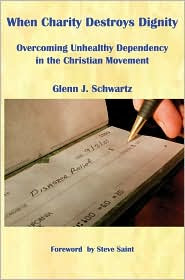 A recent book, When Charity Destroys Dignity: Overcoming Unhealthy Dependency in the Christian Movement sounds promising. It is written by Glenn J. Schwartz who served as a missionary to Africa for over thirty years.  Schwartz's theme is the dangers of charity. He specifically discusses how well-intentioned missionary efforts have fostered churches in Africa that are dependent on continued material and spiritual support from Western Christians instead of self-sufficient churches that are themselves sending out missionaries.

A provocative review of the book appeared in the Fall 2008 edition of Faith and the Academy. You can read the review by clicking here.
Posted by Shawn R at 2:08 AM