Give Thanks to the One who Deserves It 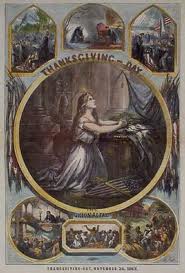 Back in 2002 Gary Hull, a senior writer for the Ayn Rand Institute from 1997-2002, wrote a piece on Thanksgiving that has since appeared in many periodicals, including the Allied News and the Pittsburgh Tribune-Review.  He entitled the essay "Thanksgiving: The Producer's Holiday" Hull, devout Randian that he is, argues that God should have nothing to do with the holiday. Instead we should pay homage merely to human productivity.

Keeping God out of Thanksgiving is problematic to say the least because holiday is a word that derives directly from an Old English word that indeed means "holy day." In other words, it is by nature a day in which we turn our attention to the Lord of all creation to give thanks for His many blessings to us.

Thanksgiving, a uniquely American holiday, celebrates man's productive ability. It is not a day of national guilt or a religious festival. This holiday is designed to celebrate, not faith and charity, but thought and production.

Hull goes on to say that by making the holiday a religious festival "is a slap in the face of any person who has worked an honest day in his life."

As the French say, au contraire. Hull's argument is entirely without reason. I wrote a letter in response to Hull's op-ed to editor of the Pittsburgh Tribune Review who kindly published it. Today I reproduce the letter in its entirety below.

Gary Hull's Thanksgiving commentary is an all-too-typical example of what happens when a free-market supporter rejects God ("The Producer's Holiday," Nov. 28). Hull rightly suggests that we should all be very thankful for our ability to produce wealth in this country. However, because of his hostility to God, he makes several key errors.


Hull also claims political freedom is the precondition of production. While this is a common belief, it is nonetheless incorrect. Democratic elections do little to ensure that people are able to produce and accumulate wealth. The institution of private property is what makes exchange, the division of labor, saving and investment and capital accumulation possible.


Hull makes his grossest error, however, when he argues that "Many Americans make Thanksgiving into a religious festival," ascribing "our material abundance to God's efforts, not man's" and that "That view is a slap in the face of any person who has worked an honest day in his life."


It is true that production would not be possible without human effort. Giving thanks to God does not ignore this. It does, however, recognize that the ultimate source of all material wealth is God.


Thanking God for His blessings is not a slap in the face to anyone, but is simply giving credit where credit is definitely due.