Last August I suggested that, because the Fed announced that they were going to hold the targeted Federal Funds rate at an all-time low until mid-2013, we seemed to be entering the age of QE Infinity. All quantitative easing, all the time.

Well, Business Insider's Chart of the Day reveals that, sadly, it does seem to be the case that we have entered a brave new world of central bank inflation. Spyros Andreopoulos at Morgan Stanley produced this graph showing how aggregate central bank assets as a percentage of GDP for the Federal Reserve, the Bank of Japan, the Bank of England, and the European Central Bank has changed over the past six years. 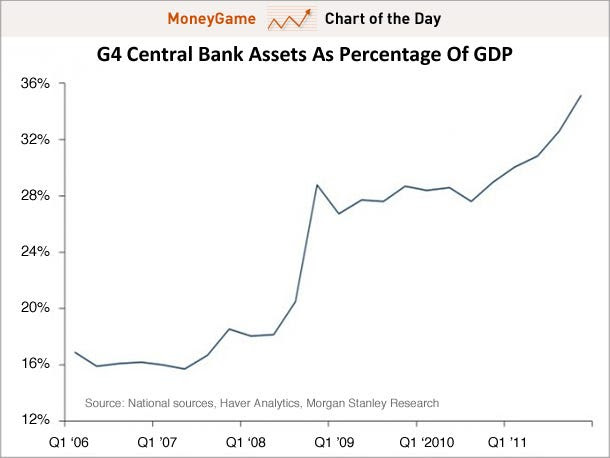 The direction has been seriously up. Central bank assets as a percentage of GDP  has increased dramatically--from 16 to 36 percent--since the first quarter of 2007. Central bank assets have been increasing because these banks have been buying up bonds with newly created cash. The more assets they hold, the more money they interject into commercial bank reserves. The more reserves held by commercial banks, the more potential inflation that could be on the horizon.
Posted by Shawn R at 1:00 AM