The Fed HAS Failed

When we fail to achieve our goals, it is human nature for us to try to make ourselves feel better by comparing ourselves to someone who has failed even worse. I thought of this when I saw yesterday's Chart of the Day at Business Insider. Fed apologist Joe Weisenthal uses the chart below to argue that it is the Bank of Japan that really has failed since 1995. 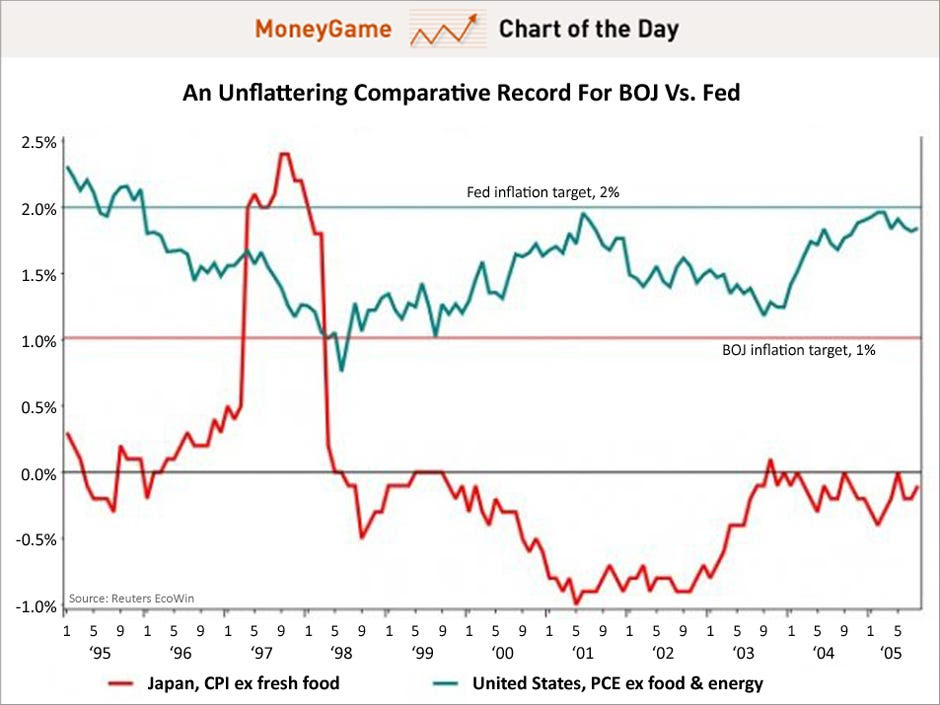 Weisenthal notes that the Bank of japan has had a much harder time hitting its inflation target of 1% than the Fed has of hitting its target of 2%. The Fed is relatively much more capable and credible. QED.

I would argue, however, that to measure an institution's effectiveness, one should not compare its performance to someone else, but rather should examine whether it has fulfilled its stated purpose. The Employment Act of 1946 stated that the official economic policy of the United States Government was "to promote maximum employment, production, and purchasing power." This general directive was explicitly applied to the Fed by the The Federal Reserve Reform Act of 1977 which identified price stability as a monetary policy goal. The following year, the Full Employment and Balanced Growth Act was approved and established full employment as a second goal of monetary policy.

Let's see how well the Fed has fulfilled its mandate. The chart below shows what has happened to the Consumer Price Index since the Fed's inception. So how well has the Fed maintained price stability during its almost 100-year tenure? Not so well. The dollar has lost over 95% of its purchasing power since the advent of the FED. The increase in prices has been especially steep since leaving the last gasp of the international gold standard. The chart below shows what has happened to consumer prices since August of 1971 when Nixon closed the Gold window: It is almost a continual climb upward. The performance for the period after August 1971 is very important, because once the international gold standard was abandoned, the only constraint on monetary policy was the Fed itself. It is one thing for the Fed to keep prices relatively stable when it knew that profligacy meant significant gold drain. Indeed even that threat proved too weak by the late 1960s, which prompted Nixon to abandon our obligations and cut the dollar free from gold. It is easy to see how successfully the Fed has stabilized prices since then.

The Fed clearly has failed in its mandate to maintain price stability. What about employment? It turns out that the unemployment rate has been wildly erratic since 1948, the farthest back unemployment data goes at FRED, the St. Louis Federal Reserve Data Base. This is not a picture of stability. Instead the track record is one of repeated economic cycles which manifest significant unemployment.

Not withstanding the claims of Joe Weisenthal, the clear conclusion is that the Fed is  a failure. It clearly has not fulfilled its mandate. Sound monetary theory and business cycle theory teaches that the Federal Reserve has failed because it has caused price inflation, a massive shrinkage of the purchasing power of the dollar and the business cycle.
Posted by Shawn R at 11:53 PM