The Importance of Economic Theory

One of the points I stress in my Foundations of Economics course is the importance of one's economic framework and its consequences for economic theory. When faced with an economic problem the first inclination of most people is to jump right to the policy prescription that they think will solve the problem. The trouble is, as I tell my students, any economic policy is only as good as the economic theory from which it springs. Bad economic theory tends toward bad economic policy.

If a person thinks that there is no God and that humans are basically more advanced animals ruled by biology, then he is more likely to think what we call human action is more like human behavior reacting to various stimuli in some prescribed manner. Such a view of man implies modeling economic activity as the result of behavior driven by, in Veblen's term, "lightning fast calculators of pleasure and pain."

On the other hand, if someone thinks that man is a creature made in the image of God who thinks, plans, and acts with a purpose, he is more likely to view man as a being who continually manifests purposeful behavior. He recognizes that, while man is a biological entity, he is not merely that. He is a being who acts according to his volition, not merely biological instinct. He is a being who is free to respond to various stimuli according to his will. Such an understanding of man points toward the causal-realist (Austrian) economic framework.

All of this is important, because economists' policy recommendations are reflective of their economic theory. A good example of this importance of economic theory can be found in a recent National Association of Business Economists survey.  The survey contains a lot of information about the thoughts of contemporary economists and the survey report contains a very revealing graph illustrating what economists think of current fiscal policy: 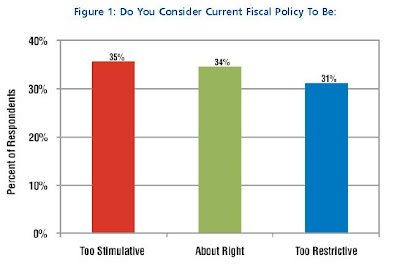 Economists are almost evenly split between thinking the government spending is too much, is too little, and is just right. Who can blame people for treating economists with severe cynicism.

This failure to get their policy act together is not due to economists' disagreement in their desired ends. No doubt all of the participants in the survey prefer life to death and prosperity to poverty. The reason for their division is differences in their understanding of economic theory. If one gets their theory wrong, they will recommend bad policy.

As mentioned above, good economic theory begins with a proper understanding of human action, which requires a proper understanding of man. Such sound economic theory allows us to understand that the consequences of fiscal stimulus are useless at best and destructive at worst. Such a consideration is one more reason why the way we do economics at Grove City College is important.
Posted by Shawn R at 1:05 PM