Despite the decrease in official unemployment, the jobs scene is still pretty bad. Asha Bangalore of Northern Trust provides this disappointing summary, "The main takeaway from these numbers is that the number of jobs created since the recovery commenced in June 2009 is troubling and raises the level of concern for policymakers."  She notes that "the level of employment. . .is still significantly below the prior peak even after nineteen months of economic growth." She could just as easily said "apparent economic growth." The same employment story is told by Business Insider's "scariest Jobs chart ever." 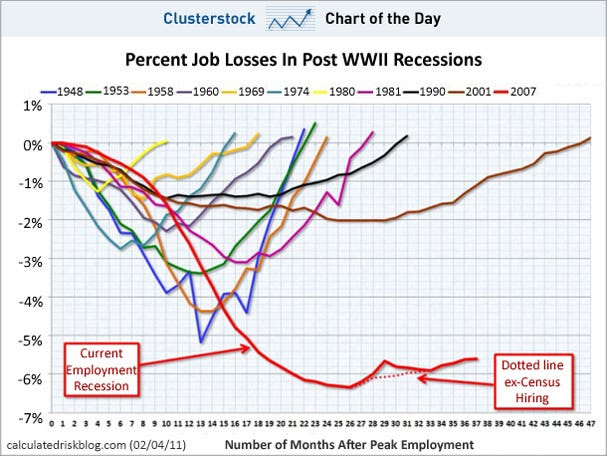 Of course, our rulers want to appear on the job doing what they can. According to a Bloomberg news story,"President Barack Obama is stressing job-creating public investments in education, technology and infrastructure as he prepares to send a budget to Congress." One should note that these are less examples of investment than they are of government consumption.

If we really want to lower the unemployment rate, we should cut government spending and taxation, eliminate unemployment compensation, and abolish the minimum wage. Lower taxes and government spending would foster private capital accumulation and work to increase demand for productive labor. Getting rid of unemployment subsidies and minimum wages would greatly work toward achieving market clearing wage rates.The longer we hamper labor markets from freely adjusting to new economic realities, the longer we perpetuate unemployment.
Posted by Shawn R at 2:00 AM