A Tale of Two Sets of Stock Markets 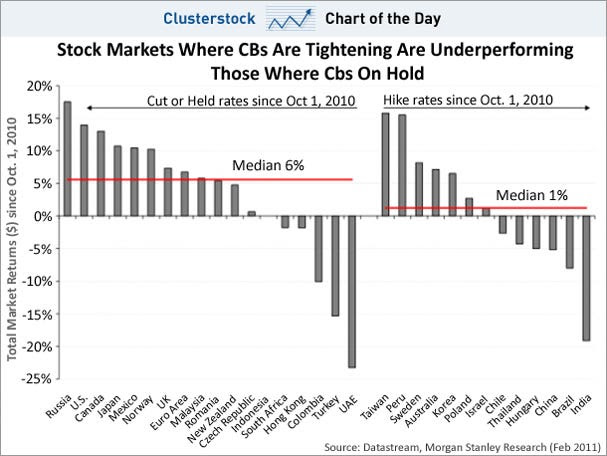 Economists at Morgan Stanley see future interest rate increases as potential threats to equity markets. They cite data showing that in those countries in which the central bank has increased interest rates since October 1, 2010, total stock market returns have decreased. Whereas in those countries where the central bank has cut or held rates steady, stock returns have increased.

This is not surprising given what we know about monetary theory. As Jesus Heurta de Soto has so thoroughly explained, in his Money, Bank Credit, and Economic Cycles, when banks hold interest rates artificially low, that artificially raises the value of capital assets because the future streams of income generated by those assets are discounted at a lower rate. Because the value of capital assets of businesses increase, the value of stocks that represent shares of ownership of those assets rise as well. Additionally, a good share of money that is created via the credit expansion process is spent directly in the stock market. That is why, as Heurta de Soto argues,


Only when the banking sector initiates a policy of credit expansion unbacked by a prior increase in voluntary saving do stock market indexes show dramatic and sustained overall growth. In fact newly-created money in the form of bank loans reaches the stock market at once, starting a purely speculative upward trend in market prices which generally affects most securities to some extent. Prices may continue to mount as long as credit expansion is maintained at an accelerated rate. Credit expansion not only causes a sharp, artificial relative drop in interest rates, along with the upward movement in market prices which inevitably follows. It also allows securities with continuously rising prices to be used as collateral for new loan requests in a vicious circle which feeds on continual, speculative stock market booms, and which does not come to an end as long as credit expansion lasts. As Fritz Machlup explains:


If it were not for the elasticity of bank credit, which has often been regarded as such a good thing, the boom in security values could not last for any length of time. In the absence of inflationary credit the funds available for lending to the public for security purchases would soon be exhausted.

Therefore (and this is perhaps one of the most important conclusions we can reach at this point) uninterrupted stock market growth never indicates favorable economic conditions. Quite the contrary: all such growth provides the most unmistakable sign of credit expansion unbacked by real savings, expansion which feeds an artificial boom that will invariably culminate in a severe stock market crisis (pp. 461-62).

Artificially low interest rates can indeed inflate stock prices, among other things. However, this is not the result of increased savings generating sustainable economic expansion. The monetary inflation via credit expansion that makes interest rates artificially low breeds malinvestment and inflationary booms that culminate in economic recession.