I have explained before that when parties engage in voluntary exchange, both benefit in the sense that each party obtains a good they value more than the good they trade away. When the state hampers the market in a way the reduces mutually beneficial exchange, this harms citizens by frustrating their preferences. 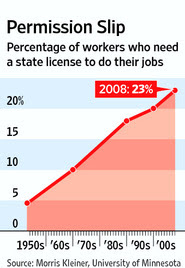 We should keep these foundational economic principles in mind when considering new legislation from Michigan that will now requires all masseuses to be licensed by the state. This new law in Michigan is just one example of a growing trend throughout the country documented by the Wall Street Journal. The number of people employed in industries that require a government license is on the rise.

What may surprise some is that pressure for such regulation is coming from those in the industries themselves. Why would they do that? To restrict competition. If it becomes harder to enter an industry because, in addition to normal economic costs of operation, participants must spend time and money for government approved training and licensing, these additional costs make it more difficult for potential workers to enter the regulated field. This restricts the supply and thereby raises the price for whatever is licensed. Morris Kleiner, a University of Minnesota labor professor, has shown that in occupations that are licensed in some states and not in others, from 1990 to 2000 employment growth in states without regulation grew 20% more than in those states with licensing requirements. In another study by Kleiner and Alan Krueger, they found that licensed workers earn 15% more than workers in the same occupation in states that do not require licensing.

So what has government licensing wrought? Consumers paying higher prices for fewer services. Fewer mutually beneficial exchanges take place and more people have their preferences frustrated.
Posted by Shawn R at 2:00 AM