Will Japan's Earthquake Be an Economic Boon?

Larry Summers thinks so (HT: Jeff Tucker). It is so sad that, almost like clockwork (to use a timeworn cliche in pointing to another timeworn economic cliche), some economist who has drunk too deeply at the fount of Keynesianism, has already asserted that, because of Japan's earthquake, their economy will receive a short term boost.

How in the world will the destruction of massive amounts of capital and durable consumer goods grow an economy, one may be excused for asking. The answer from Larry Summers and Keynesians like him, is that the Japanese will now have to spend more to rebuild, which will result in a boost to GDP. Of course, however, as I point out to my students, spending does not necessarily equal economic well being. I have already explained on this blog that we should be careful not to confuse GDP with the economy. Instead of spending a lot of yen to rebuild a home. It would be better to still have the home and still have the yen that could be directed to purchasing additional goods that could be used to satisfy even more ends. GDP measures spending as a flow of income, it does not measure wealth.

Summers cites as support for his case, the aftermath of the Kobe earthquake that hit Japan in 1995. It turns out that, according to SG Cross Asset Research, the data reveal that Summers' claim is wrong. 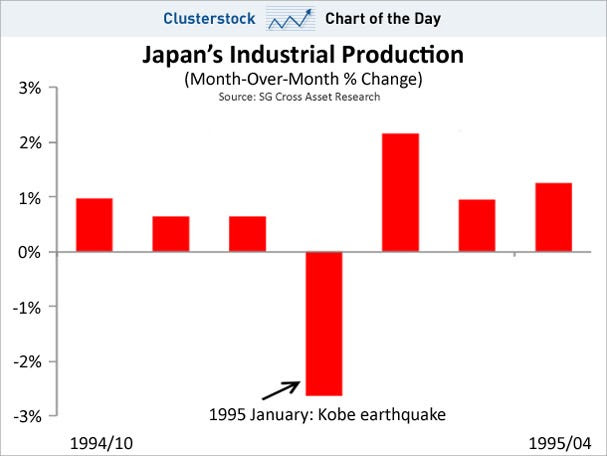 There was a significant decrease in industrial production due to the Kobe earthquake. No matter what certain "experts" say, we cannot achieve prosperity, even in the short-term, by breaking things.
Posted by Shawn R at 3:26 PM