Yesterday, I commented on the assertion that the current deficit/debt problem is one of revenue, not spending. Jordan Ballor at the Acton Institute provides even more perspective on government spending versus revenue. The graph used to justify the claim is reproduced here: 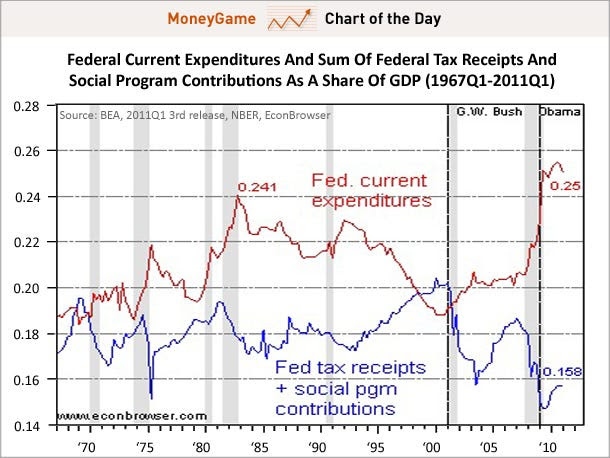 I noted how the graph cannot carry the weight of the argument and that, in fact, we do have a spending problem. I also made reference to another, more important, truth illustrated by this graph and that goes a long way toward solving a puzzle oft repeated during the present debate over the government budget.

Sound economic theory teaches that taxation retards economic expansion because it reduces the ability and incentive for people to save and invest, thereby causing capital consumption over time. As workers have fewer captial goods with which to work, they become less productive, real incomes fall as does the standard of living. These facts, in addition to supply-side ideology, is what drives much rhetoric from conservatives who refuse to entertain tax cuts as a way to solve our deficit problems.

The negative relationship between taxes and economic progress, however, is inconvenient for those, like Paul Krugman and Robert Reich, who cherish the welfare state. They must say something to defend higher taxes on "the wealthy" with some semblance of economic validity. They have taken to appealing to recent economic history. They look at the Clinton administration's fiscal policies, which included a noticeable tax increase in 1993 and following economic expansion and compare that to the Bush tax cuts of the 2000s and the following economic stagnation and conclude that tax cuts do nothing for the economy, while tax increases can be, as Martha Stewart might say, a good thing. The facts as presented do seem to fly in the face of good economics. What gives?

A large part of the answer lies in something revealed by the chart above. The variable to keep your eye on when accounting for the state's drag on economic society is government spending, not merely taxes. Notice that government spending as a percentage of GDP fell throughout the Clinton administration and then began to increase sharply early in the Bush presidency and then again during the most recent recession.

How government spending is financed is less important macroeconomically speaking than the magnitude of government spending. If government spending is funded by borrowing instead of taxes, private savings are still squandered, capital is still consumed, productivity is still repressed, and society is still relatively impoverished. Even though tax revenues increased during the Clinton presidency, spending as a percentage of GDP fell. That helps account for the seeming paradox of economic expansion in the wake of tax increases. Likewise, even though tax revenues decreased during the Bush II administration, spending as a percentage of GDP increased dramatically, giving us a rather stagnate economy during the 2000s.

The above analysis gives us at least two practical lessons. The first is that government spending is the primary source of macroeconomic regression, not how such spending is financed. The second is a corollary to the first. The best thing we can do to usher in long term economic prosperity it not to focus on balancing the budget per se, but to indeed reduce spending. If we balance the budget by raising taxes, we merely trade one form of capital consumption with another. Like the Talking Heads, we will be on the road to nowhere.