You Get More of Whatever You Subsidize 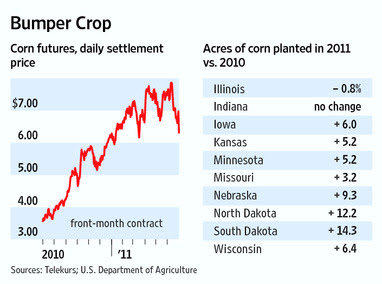 What is true for poverty, home buyers, and unemployment, is also true of ethanol. You get more of what you subsidize.

You can read about a good example of how government intervention directs resources away from people's most valued uses in today's Wall Street Journal. It reports that corn futures have taken a strong hit as USDA surveys reveal that during the first two weeks of this June farmers "planted 92.3 million acres of corn, the second most since World War II. . . ." This is the logical consequence of dramasticly (that is a combination of dramatic and drastically) higher corn prices throughout 2010 and the first half of 2011. These higher prices, in turn, are the logical consequence of subsidies to ethanol producers.

More farmland than would be in a free economy is now being directed toward the production of corn.This is farmland that cannot now be used to produce something that people would actually value more.
Posted by Shawn R at 2:16 AM