Not only are there no jobs. There is no recovery. Such is the verdict, correct in my opinion, from Tim Kane at Growthology.

The concept of a jobless recovery has been redefined, both for America and for my family, with the new jobs report out this morning. For America, this is the first jobless recovery lacking not only jobs, but also a recovery. A freind the other day noted it was the 2 year anniversary since that recovery officially began.

Jeff Tucker has also alerted us to the fact that mainstream media may be catching on that the recovery was, as they say, only on paper.


Because a picture is worth a thousand words, give or take a few, Joe Weisenthal at Business Insider has compiled a set of graphs compiled from the June jobs report published by the Bureau of Labor Statistics. It is headlined by what he calls the new scariest jobs chart ever. 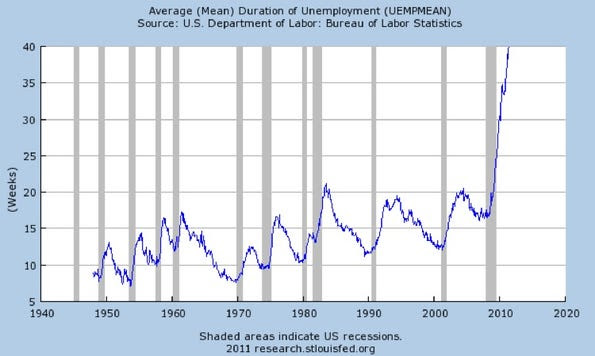 This in addition to the traditional graph they call the Scariest Jobs Chart Ever which is scarier than ever. 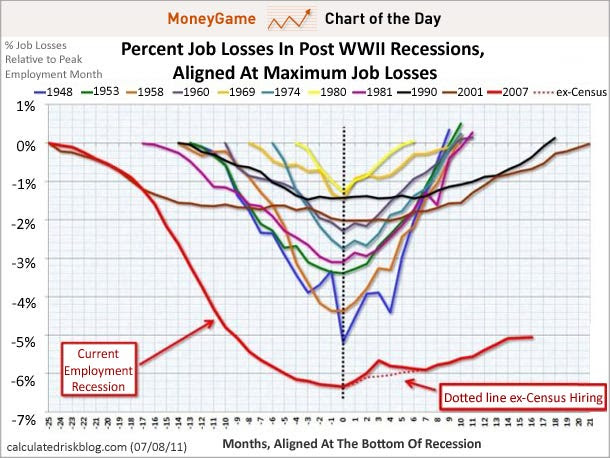 Together they paint a very dismal picture indeed.  I've said it before and I'll probably say it again, money cannot buy prosperity.

Inflation-fueled spending does not result in true economic prosperity in the form of more goods to satisfy our ends. It might encourage more spending, but not investment that reflects the wishes of society. Investors are encouraged to invest in industries that are too capital-intensive relative to the wishes of savers in society. Such malinvestment fuels investment bubbles.

For all the money the Federal Reserve has created and the government has spent we have merely prolonged the necessary readjustment process and capital accumulation process that could serve as a solid foundation for true economic prosperity.
Posted by Shawn R at 2:49 AM