President Proposes More of the Same

As expected, President Obama's jobs plan is a plan right out of the Keynesian play book. It calls for approximately $245 billion in tax cuts next year coupled with increased spending of about $202 billion on infrastructure, unemployment extensions, and programs for the jobless.

President Obama is facing an economy that has not yet been able to produce enough new jobs to bring the official unemployment rate below 9%. 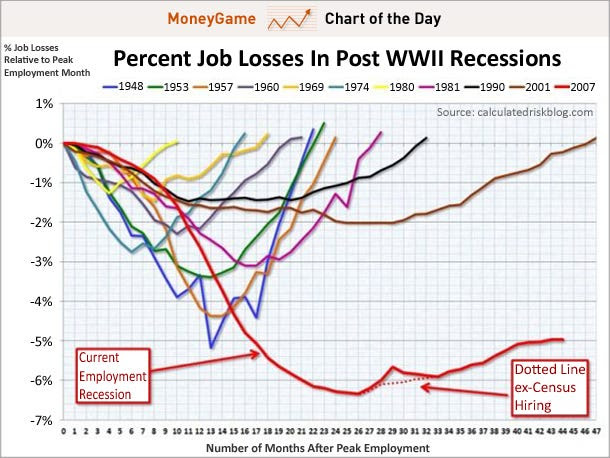 He may want to help the economy expand so as to alleviate personal suffering. He might also recognize that this could be his last chance to do something that will lift the economy to at least improve his legacy if not allow him to win the next election. In any event, the means he has proposed to direct us toward economic recovery have been chosen because of his general Keynesian view of the economy.

His notion is that spending, or aggregate demand, is the engine that drives the economy. The reason we are stuck in this rut, the theory goes, is that people are not spending enough. Therefore the state must spend $140 billion on modernizing schools and renovating vacant houses demand for goods will increase, raising incomes and encouraging even more spending. If we also cut taxes by $245 billion, people will take their extra money and spend it. Hopefully the spending will be multiplied many times over and happy times will be here again.

Before we get too optimistic, however, we should remind ourself again that spending per se does not produce anything. The only source of economic progress is net saving, something the state is inherently loathe to do. It is great at consumption, but lousy at investment. At a time at which our national debt is at an all time high, the President is asking for a set of proposals which will increase the deficit by another $447 billion. This will have to be funded by either borrowing private capital out of the economy or with new money made possible by our friends at the Federal Reserve. Neither of these options is conducive to economic prosperity. Instead of Obama's proposal being a jobs plan, it really is, as my fried Bill Anderson termed it, a "Let's Continue the Depression" proposal.
Posted by Shawn R at 1:51 AM