Tax Cuts May Not Be the Answer

I am as much in favor of tax cuts as anyone. Taxes bring with them the negative economic consequences of lower incomes, reduced social welfare, less saving and investment, capital consumption, and, hence, lower standards of living over time. With that in mind, one might expect that I would greet reports that President Obama is considering even more tax cuts as a way to boost the economy a slam dunk of a good thing.

Unfortunately, tax cuts may not be the economic panacea they are advertised to be. Certainly not for the reason Bloomberg news reports.

With Obama set to lay out his plans in a Sept. 8 address to Congress, the administration is focusing on cuts targeted at middle-income Americans to spur consumer spending, which accounts for 70 percent of the economy, said the person, who spoke on condition of anonymity to discuss internal deliberations.

In the first place, consumer spending does not make up 70 percent of the economy, it makes up roughly 70 percent of GDP. The bulk of economic activity is gross investment not accounted for in GDP figures. Boosting GDP does not equate to boosting prosperity. Additionally, consumption does not result in higher standards of living, saving and investment does. The more income spent on consumption, therefore the less saving and investment that occurs. The lower our capital stock will be over time, which will reduce our productivity and real incomes over time. This reduces prosperity, not stimulates it.

Finally, the fiscal category that really matters for the social economy  is total government spending. If taxes are cut while government spending continues to increase at expected rates, this merely increases government debt, which requires additional savings to be sucked out of the private economy. 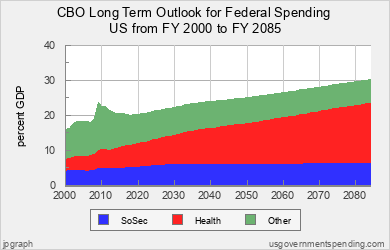 Even if every dime and penny of a tax cut would be saved, it would be offset by the same amount of private savings being given to government bureaucrats for government consumption. What a tax cut giveth, state borrowing taketh away.

If the President truly desires to enable economic recovery, he should argue for significant real reductions in government spending matched dollar for dollar with tax cuts. This sort of fiscal policy would be one much more conducive to economic progress.
Posted by Shawn R at 2:00 AM