So yesterday we had another example of how one's analytical framework drives one's perceptions of the economy and prospects for prosperity. Business Insider's Joe Weisenthal writes that "Sorry, But the Idea That We're In a Recession Is Nonsense."

Exhibit A in making his case is that there has been a substantial uptick in consumer credit: 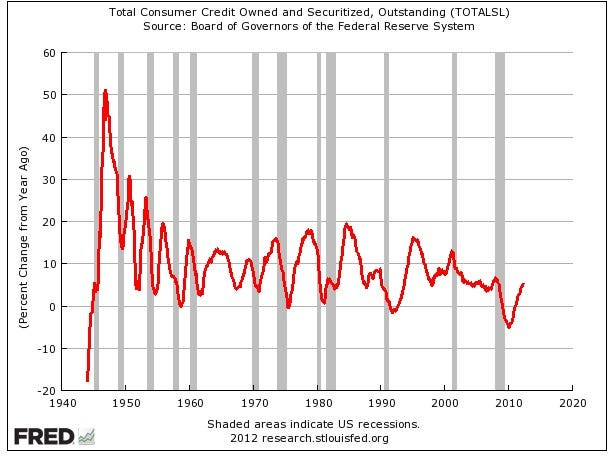 To further bolster his claim, Weisenthal points out that personal consumption relative to wages has been increasing. There has been no serious effort for households to retrench their consumption spending since early 2008.

I do not dispute this data and understand why Weisenthal sees all of this as good news for the economy. He does so because of his generally Keynesian macroeconomic framework. For him the economy is GDP, which is driven by aggregate demand which is actualized in spending. Because approximately 70% of GDP is made up of consumer spending, it is perceived that consumer spending drives the economy forward to expansion and development.

Whether or not we are in recession, recovery, or economic twilight, I would not venture to guess. It seems to me that the numbers outlined above are not definitive. That the rate of consumer spending to wages and consumer credit is increasing could merely be evidence that people's incomes are not keeping up with their buying habits. It could be that households are buying more necessary staples with a credit card. That would not be a recipe for happy economic times ahead.

What I do know is that sustainable prosperity is built neither upon consumer spending nor borrowing. Sustainable economic expansion is the result of increases in per capita capital, which requires saving and investment. It, therefore, requires a relative decrease in consumption compared to saving.
Posted by Shawn R at 6:41 PM