For those interested in the general perspective I take on macroeconomic policy in my book Foundations of Economics, a good brief overview is presented by Jason Jewell. He has been live blogging my book and presents a thorough summary of Chapter 14, my examination of Monetarist and Keynesian macroeconomic framework and policy. So as not to keep any of you in suspense, I reject both fiscal economic management and monetary inflation on both economic and ethical grounds.
Posted by Shawn R at 9:04 AM No comments:

Several years ago I contributed a chapter about Wilhelm Röpke to the book Great Austrian Economists. The chapter was entitled "Wilhelm Röpke: A Humane Economist," and I just learned that it has been translated into Turkish and appears on the LiberalEkonomi.com website.
Posted by Shawn R at 1:44 AM No comments: 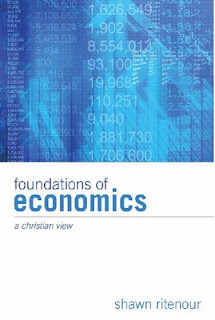 Jeff Tucker at Laissez-Faire books recently made the case for "live blogging a book." A live blog (as opposed to a dead blog) is different than a book review or report. It is a series of blogs about parts, sections, or chapters written as you proceed through the book.

Jason Jewell at The Western Tradition is doing essentially that with my Foundations of Economics: A Christian View. He is one of the great readers of our generation. On top of his monumental Great Books Project, he is plowing through my book in preparation for a panel devoted to my book at next month's Christian Scholars Conference at Libscomb University. And he is reading it with enough care to provide very thoughtful and accurate summaries of each chapter. Within the last week he has discussed Chapters 7 though 11 covering the topics production, capital, and income maximization; profit and interest; prices of factors of production; competition and the number of sellers; and, just today, the production structure and the social economy. Hats off to Dr. J. for his commitment to this work.
Posted by Shawn R at 10:28 AM No comments:

Latham on Austerity and Its Critics

Grove City College Economics major Kyle Lathamm, who is graduating tomorrow, has written the most recent essay published by Grove City College's Center for Vision and Values. Latham's work, "Britain, Austerity, and Lessons of Economic History" is both insightful on its own merits and also instructive of the sort of economics education one can receive here at GCC.
Posted by Shawn R at 5:24 PM No comments:

As announced on this blog over the past few days, Jeffrey Herbener and Peter G. Klein will be shining the light of economic truth on the dark question of Federal Reserve Reform while giving testimony to the U.S. House Committee on Financial Services, Domestic Monetary Policy and Technology Subcommittee. You can watch a video of the entire hearing below:

Klein's Testimony on the Federal Reserve

The written testimony Peter Klein is presenting to the U. S. House Committee on Financial Services, Domestic and Monetary Policy Technology Subcommittee is now available on-line. Klein is appearing before the committee along with my department chair, Jeff Herbener. They will be going up against some pretty  big names: John B. Taylor, Alice Rivlin, and James K. Galbraith.

Klein's specialty is the economic theory of organizations, especially how organizational structure and the institutional environment effects a firm's ability to efficiently serve customers, and hence earn profits.  As such, his comments focus on the challenges faced by a central money printing machine when trying to manage an economy. On the prospects for successful monetary management by the Fed, Klein writes:

The mistakes made by the Fed before and after 2008 are not isolated incidents, mistakes that can be corrected by making minor changes to the Fed’s charter, structure, or independence. They are the predictable result of giving control of the monetary and financial system to a government agency. The best option is to replace the central bank and let the market be in charge of money.

Herbener to Testify on Federal Reserve

My friend and department chair, Jeffrey Herbener is scheduled to testify before the Subcommittee on Domestic Monetary Policy and Technology next Tuesday, May 8. The Subcommittee is chaired by Ron Paul and is under the Committee on Financial Services in the U.S. House of Representatives. The Subcommittee will be considering "Improving the Federal Reserve System: Examining Legislation to Reform the Fed and Other Alternatives."

Herbener's written testimony is already posted to the Subcommittees webpage. He will be appearing along with another friend of mine, Peter G. Klein, Associate Professor, Applied Social Sciences at the University of Missouri, and other economists John B. Taylor, James K. Galbraith, and Alice Rivlin.

Just a couple of weeks ago, Jeff and I contributed to a presentation on important contemporary economic issues for this year's Center for Vision and Values conference. Jeff spoke about sound money. His appearance before Ron Paul's Subcomittee is a tremendous opportunity for Jeff to present the case for sound money to a legislative body who desperately needs both to hear it and to act upon it.
Posted by Shawn R at 1:45 AM No comments:

Freiling on Power and Market

Grove City College economics student Nick Freiling has an excellent review of Murray Rothbard's Power and Market on today's Mises.org. A good summary of the virtues of Power and Market, is given in this extract from Freiling's review:

Rothbard understands government intervention as a distortion of the natural economic order, whereby all men are free to contract with all others. But Rothbard's personal views are not manifested in Power and Market by way of partisan or lopsided political rhetoric. Rather, his analysis of the effects of economic intervention is strictly academic and consistent with the charge of professional economists to remain wertfrei, or value neutral, while elucidating economic truth. Where Rothbard does criticize impure laissez-faireists and proponents of government intervention, it is not without a strong defense of his own views and a careful dissection of exactly where interventionist policies go awry. His opponents are thus painted as wrong by implication of his economic analysis and not by his assumptions about their unspoken motives or their being of a different intellectual background or political persuasion.

Freiling gets it just right here. What is so persuasive in Rothbard's arguments is his relentless logic, not the hyperbolic ranting or biased sentimentalism we see too often mistaken for policy analysis today.

I have drawn heavily upon Rothbard's work in Power and Market for the sections in my Foundations of Economics that deal with economic policy. I recommend both Freiling's review and the book itself. I also encourage you to take a gander at the economics blog to which he contributes, Hans Economics.
Posted by Shawn R at 10:23 AM No comments:

It is no secret that the Spanish economy is in serious trouble. Just recently it was announced that it had taken a second dip into recession. Philipp Bagus, Professor of Economics at Universidad Ray Juan Carlos in Spain was recently interviewed on the RT network about the unpleasantness in Spain.

In this brief interview, Bagus provides insight on the real and negative consequences of decades of government intervention in the Spanish economy and the future of the Euro.

He also provides important clarification on the austerity question. Many Keynesians, such as Paul Krugman, have been claiming that Europe has tried fiscal austerity, the economies are in trouble, ergo Keynes was right QED. Bagus explains the important difference between true and phony austerity. True austerity requires a reduction of state presence in the economy, not higher taxes.

Last Thursday, the ever-interesting and insightful Jim Grant, editor of Grant's Interest Rate Observer and author of one of my favorite books on economic history, Money of the Mind, was the guest for the entire Capital Account hosted by Lauren Lyster. Lyster's delivery is occaissionally over the top, but Grant is always worth listening to. In this interview he explains the importance of interest rates and how, despite paying lip service to market prices, Ben Bernanke manipulates the ratio of inter-temporal prices--the interest rate--every day. On top of that, Grant routinely sports top-drawer neck wear.


Two top Federal Reserve officials, San Francisco Fed President John Williams and Dallas Fed President Richard Fisher, both said yesterday that they see no need for the Federal Reserve to ease monetary policy any further. Well that's good, given that the Fed has already increased the monetary base $1.8 trillion since September of 2009. That is a 207% in less than four years. You know Fed has done what it could to punish savers when the Bank of America is advertising its "High-Yield Savings Account" that sports an interest rate of 0.75%. In these cash gorged days, an interest rate of less than 1% is considered high-yield. To put this in perspective, a normal passbook savings account paid over 5% in 1987 while the rate for one year CDs was over 9%.