. . . .on the Tom Woods Show. Grove City College Economics Department Chairman, Jeffrey Herbener was interviewed by Tom Woods about welfare economics, sound and unsound. He explains the nature of the claim that a free market maximizes social welfare and what economists can say and importantly what they cannot say about these matters. Grove City College economics students are blessed with this level of education every day. 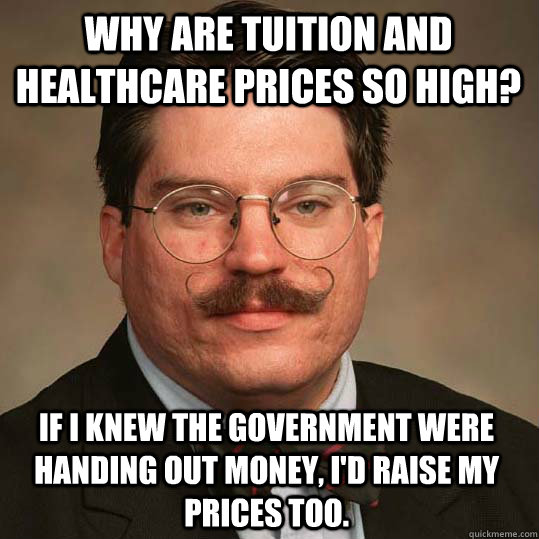 Awhile ago someone pointed me to a meme somebody else made with my photo. Although I did not say what was included as the caption, I generally agree with the sentiment. Mundane economics indicates that when the government subsidizes consumers, they will demand more. Recently William Shuggart explained why it is true that when government money is poured into the hands of demanders of higher education, the demand for college increases, resulting in higher tuition. A recent study by the New York Federal Reserve Bank corroborates this principle.
Posted by Shawn R at 9:31 PM 2 comments:

For those who like their economics to come to them electronically, Foundations of Economics: A Christian View is now available for Kindle. And at about one forth the paperback price. I personally prefer the look and feel of fine, hand-tooled paper (I'll let those who went to high school in the eighties see if they can decipher that allusion).