Confusing GDP with the Economy

Last tuesday I explained several of the problems with GDP and why we do not want to confuse it with our economy. As if on cue, Wednesday's Chart of the Day from Business Insider shows how easily GDP can distract people who should know better. 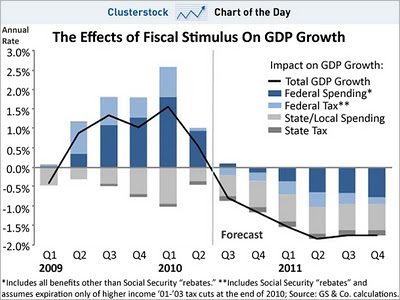 The graph is from a GDP report prepared by Goldman Sachs that purports to show the effects of the year-old fiscal stimulus measure on economic growth. The stimulus supposedly boosted economic growth through 2009 and early 2010, but as it slinks away, the economy shrivels into decline. One moral taken away by Greg White who wrote the accompanying article is that we might have been able to prolong growth if we kept in place more stimulus.