Labor Numbers and Mondays Always Get Me Down

During the Great Recession anyway. Last Friday, the U.S. Department of Labor said that non-farm payrolls lost 130,000 jobs due to more workers cut by the Census Bureau as it winds down this year's census. They also revised up the number of jobs lost in June from an initially calculated loss of 125,000 to an actual job loss of 225,000. That is, then 355,000 jobs lost over a two-month period. Nothing gives the lie to premise that we can governmentally employ our way to prosperity than these numbers. As soon as the government gravy train runs out, and it must eventually, things shift back to reality. The only good news is that private payrolls increased by 71,000, which is still too small to signal an actual recovery. Meanwhile the real unemployment rate (which includes unemployed who have given up looking for work and part-timers looking for full time employment) remained unchanged at 16.5%. 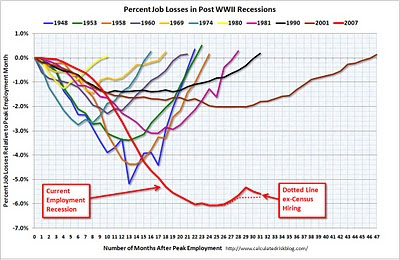 This chart and report from Calculated Risk reveals that the employment situation during our current Great Recession is worse than that in any other recession since World War II. Notice the recent shift to a downward trajectory again.

Of course all of this news has led to talk of the FED inflating monetary reserves even more and calls from Keynesian economists like Joseph Stiglitz  for even more fiscal stimulus. As I explain in chapter 14 of my book, such policies will not cure recession because government spending and artificial credit expansion merely result in the misallocation and consumption of capital. As the Beatles once said, "Money can't buy you love." It can't buy prosperity either.
Posted by Shawn R at 6:00 AM