A Picture May Be Worth a Thousand Words, but a Dollar is Worth Less and Less

Monday's Chart of the Day from Business Insider communicates a remarkable amount of 20th Century American monetary history in one graph. It quite ably shows three major monetary turning points last century, all of which encouraged increases in the rate of money creation and resulted in large increases in prices. 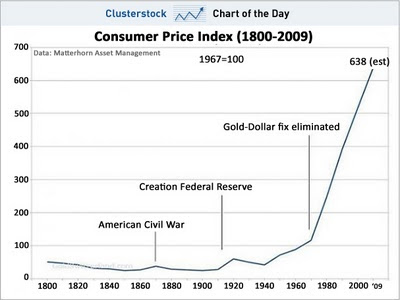 Notice first, however, that from the end of the Civil War in 1865 through about 1910 prices gradually fell, meaning that we experienced deflation (the horror...the horror!) during one of the most prosperous times in the history of our country. It is simply not true that deflation necessarily hurls us into a financial black hole sucking us further and further down a depressionary death-spiral.

Alas, deflation was the last thing we needed to worry about during the 20th Century. The first crucial turning point toward inflation illustrated by the graph was the creation of the Federal Reserve in 1913. Initially sold as a way to assist the commercial banking system to provide an "elastic" currency to mitigate financial crisis, the Fed merely made it easier to inflate the money supply, which banks did quite willingly. This led to an inflationary boom during the 1920s that culminated in a serious bust in 1929 that turned into the Great Depression.

The next turning point came after World War II with the establishment of the Bretton Woods system. The chart bears out the truth of the title of Henry Hazlitt's book, From Bretton Woods to World Inflation. Far from stabilizing the world's monetary system, Bretton Woods put us back on the inflation trail, leading to the final turning point.

That would be Nixon taking the United States off of the international gold standard. Nixon felt compelled to do that because of the severe drain of our gold reserves do to the massive inflation of dollars during the Bretton Woods era. With no more international gold anchor, the Federal Reserve was free to inflate and inflate it did. You can see what has happened to prices and the value of the dollar since then.  It is estimated that consumer prices have increased by at least 538 percent since 1960.