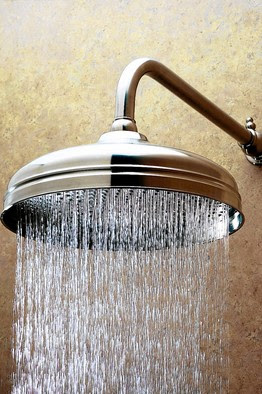 It is shocking what details of our lives the government regulates. They have already fined four companies for doing the unspeakable--producing shower heads that are too big. This has prompted John Steigerwald to warn us all to "beware the shower police."

The idea that we need the state to regulate the size of shower heads in order to control how much water people use smacks of economic fascism. The reason the state feels compelled to regulate the quantity of water used through draconian shower and toilet regulations is that it refuses to allow water to be allocated rationally via the price system. If so, when the demand for water increased relative to supply, its price would increase, creating the incentive to economize and voluntarily conserve usage. No one would have to send the state's regulatory apparatus into our bathrooms. No one would be fined, sent to jail for not paying the fine, or shot escaping from jail.

Additionally, this sort of regulation always reduces the number of mutually beneficial exchanges and thus leaves more citizens worse off compared to how they would be without the state intervention. As I put it in Chapter 17 of my book Foundations of Economics:


. . .the free market tends to maximize the satisfaction of society. Intervention in the market, however, hinders this process and necessarily creates conflict. Instead of an exchange which is mutually beneficial, one party benefits at the expense of another party.

I end the chapter pointing out the legitimate way Christians can work to regulate economic behavior:

The Christian ethic of private property does not allow them to use the coercive state to achieve their ends for a better society. Instead Christians are called to evangelize and disciple converts in the paths of righteousness. As the church does what it is called to do, people will change their preferences. They will begin to be more loving and kind to their neighbors. If Christians really want different market outcomes, they should be obedient in their calling and have faith that God can transform the hearts and minds of men and women.