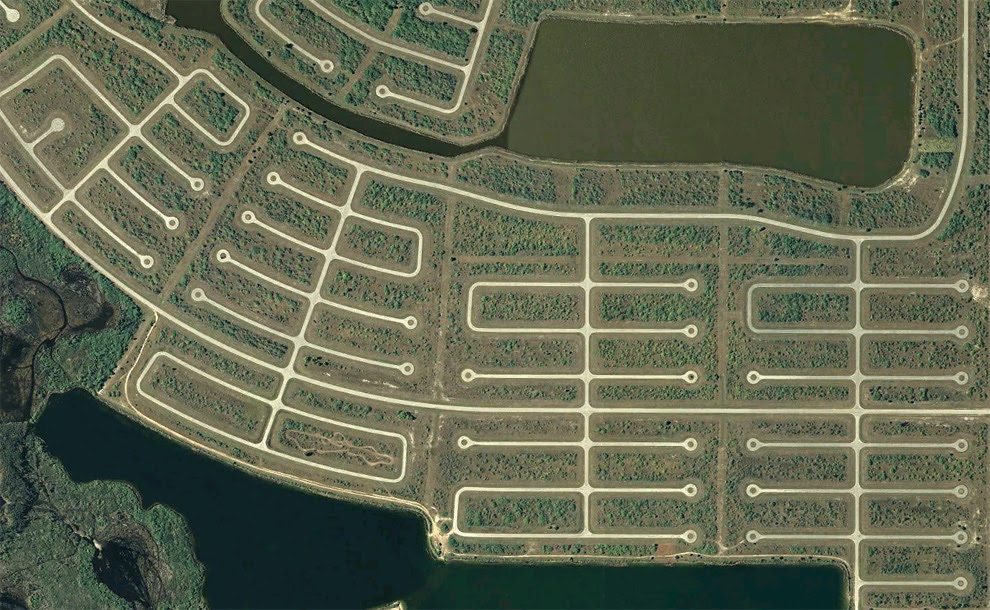 Thanks to Greg Ransom for posting a link to these stunning photos of Florida real estate malinvestment on the Mises Economics Blog. They provide literal pictures of capital consumed in projects that could not be completed due to entrepreneurs being led astray by the strange woman of artificial credit expansion. As the original post states:

The images of half finished (and barely started) developments are strangely beautiful, with a geometric symmetry that belies the state of human misery these developments represent: Lost deposits, bankruptcy, mis-allocated capital.

Appropriately, Ludwig von Mises used the analogy of a builder to explain the fundamental nature of the malinvestment that causes the business cycle. Entrepreneurs are led astray by artificially cheap credit to undertake investment projects for which there is not enough real capital goods to bring all of them to completion. Many of these projects will fail, with some ending in bankruptcy. In Human Action Mises likened the situation to a builder who tries to build a building with too large a foundation, only to realize much later that he does not have enough bricks to complete the building.


The whole entrepreneurial class is, as it were, in the position of a master-builder whose task it is to erect a building out of a limited supply of building materials. If this man overestimates the quantity of the available supply, he drafts a plan for the execution of which the means at his disposal are not sufficient. He oversizes the groundwork and the foundations and only discovers later in the progress of the construction that he lacks the material needed for the completion of the structure. It is obvious that our master-builder's fault was not overinvestment, but an inappropriate employment of the means at his disposal.

These pictures illustrate one hundred and eight words.