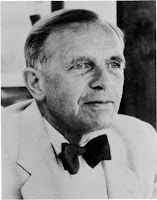 On this date in 1899 German economist Wilhelm Röpke was born. I've always had a soft spot for Röpke because of his insistence on calling attention to some of the bigger issues such as how a society's moral fabric is related to its political economy. He was a great critic of fascism, Soviet-style socialism, and mass society fostered by statism. Over a decade ago I contributed  a chapter about Röpke to the book Great Austrian Economists, edited by Randall Holcombe. The chapter begins with the following paragraph:

Wilhelm Röpke devoted his scholarly career to combating collectivism in economic, social, and political theory. As a student and proponent of the Austrian School, he contributed to its theoretical structure and political vision, warning of the dangers of political consolidation and underscoring the connection between culture and economic systems. More than any other Austrian of his time, he explored the ethical foundations of a market-based social order.

As he explained in the first chapter of his most famous work, A Humane Economy, his ethics were rooted in the Christian tradition.


My picture of man is fashioned by the spiritual heritage of classical and Christian tradition. I see in man the likeness of God; I am profoundly convinced that it is an appalling sin to reduce man to a means (even in the name of high-sounding phrases) and that each man's soul is something unique, irreplaceable, priceless, in comparison with which all other things are as not. I am attached to a humanism which is rooted in these convictions and which regards man as the child and image of God, but not as God himself, to be idolized as he is by the hubris of a false and atheist humanism. These, I believe, are the reasons why I so greatly distrust all forms of collectivism.

These ethical convictions are what led him to stridently oppose both Soviet and National socialism. He was well aware of the dangerous attraction centrally planned economies had for Mid-Twentieth-Century Christians who did not like some aspects of free markets. In the same book he wrote


People may be led by Christian and humane convictions to declare themselves in sympathy with socialism and may actually believe that this is the best safeguard of man's spiritual personality against the encroachments of power, but they fail to see that this means favoring a social and economic order which threatens to destroy their ideal of man and human freedom.

Röpke was in some ways a complicated thinker. In his book The Social Crisis of Our Time, for example, he tried to distinguish between state intervention that is compatible with the market  and what he called incompatible state intervention in the market economy. Calling for a "third way" between socialism and laissez-faire capitalism, he had a sentimental streak that longed for a way to intervene in the economy to produce more humane results.  At the same time, however, he was too good of economist not to recognize that, like it or not, any intervention in the market brought with it costs that cannot be avoided.

For some of the best of Röpke's economic work, I recommend his Economics of a Free Society and Against the Tide.
Posted by Shawn R at 2:00 AM