Pre-Keynes Keynesianism in the Work of Frank Capra 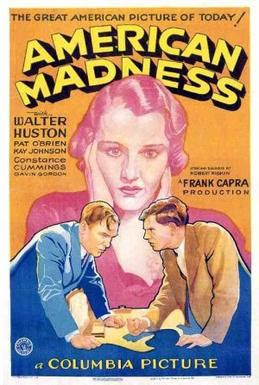 In his essay, "Lord Keynes and Say's Law," Ludwig von Mises explains that the so-called Keynesian Revolution was not that revolutionary. Mises cogently notes, "The policies he [Keynes] advocated were precisely those which almost all governments, including the British, had already adopted many years before his 'General Theory' was published." Keynes' theories did not really provide a breakthrough in economic understanding, but rather merely provided intellectual cover for what politicians were eager to do already. Keynesianism was "in the air" so to speak.


An interesting example of such Pre-Keynes Keynesianism shows up in a lesser known film directed by the great Frank Capra. In the midst of the Great Depression, Capra directed American Madness (1932). Advertised as "The Great American Picture of Today," it is the story of a bank president fighting off both his conservative board of trustees and a bank run stimulated by rumors following the robbery of his bank.

In one of the pivotal dramatic scenes (shown below), the bank president, Tom Dickson (played by Walter Houston) is responding to the bank's board of trustees that are seeking to get him to sell his shares so they can replace him as bank president. Their concern is that he has been too liberal in making unwise loans. During this scene Dickson provides a concise bit of Keynesian policy analysis.  Can you detect the Keynesian fallacy?