A common policy suggestion in times of financial crisis is for central bankers to pump large sums of money into the economy. The hope is to fix the problems associated with recession through increased aggregate spending. Quantitative easing, however, never fixes the problems resulting from malinvestment, because the problem is a capital structure that is out of balance. Inflation certainly does not undo the depression in those markets where malinvestment was the worst. Look at the some of the effects of monetary inflation undertaken by the Fed at the end of 2008.

Everyone knows that the housing bubble made up a large part of the inflationary boom that brought about the Great Recession. As the housing bubble burst, mortgage backed securities began to lose value and the financial crisis was on. The effects of quantitative easing on the housing market has been negligible. Meanwhile, the new money that has been created by the Fed is being invested wherever their is a pulse of positive yield. One of this year's popular investments are in emerging market bond funds, as shown in this chart from Business Insider. 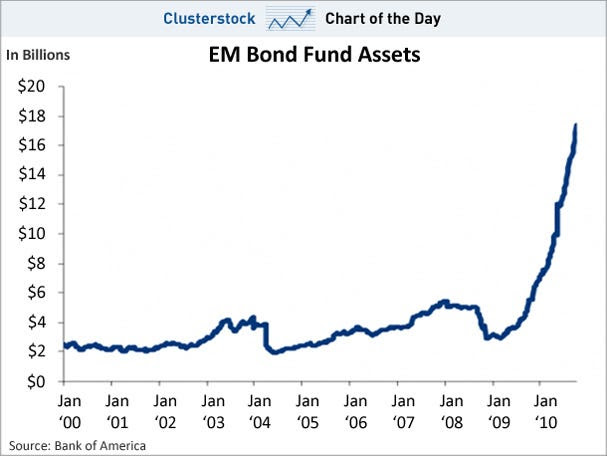 The moral of the story is that reflation is inflation and new inflation does not undo the negative consequences of past inflation. It results in further wealth redistribution and further malinvestment.
Posted by Shawn R at 2:00 AM