Have We Cultivated a Culture of Living Off of Other People?

A recent poll indicates that might be the case. Henry Blodgett of Business Insider indicates that "Americans Are Still in Deep Denial About the Deficit." He cites a Washington Post-ABC poll which reveals

The survey finds that Americans prefer to keep Medicare just the way it is. Most also oppose cuts in Medicaid and the defense budget. More than half say they are against small, across-the-board tax increases combined with modest reductions in Medicare and Social Security benefits. Only President Obama’s call to raise tax rates on the wealthiest Americans enjoys solid support.


People want to maintain their government largesse, but do not want to pay for it. The want the "wealthy" to do so. 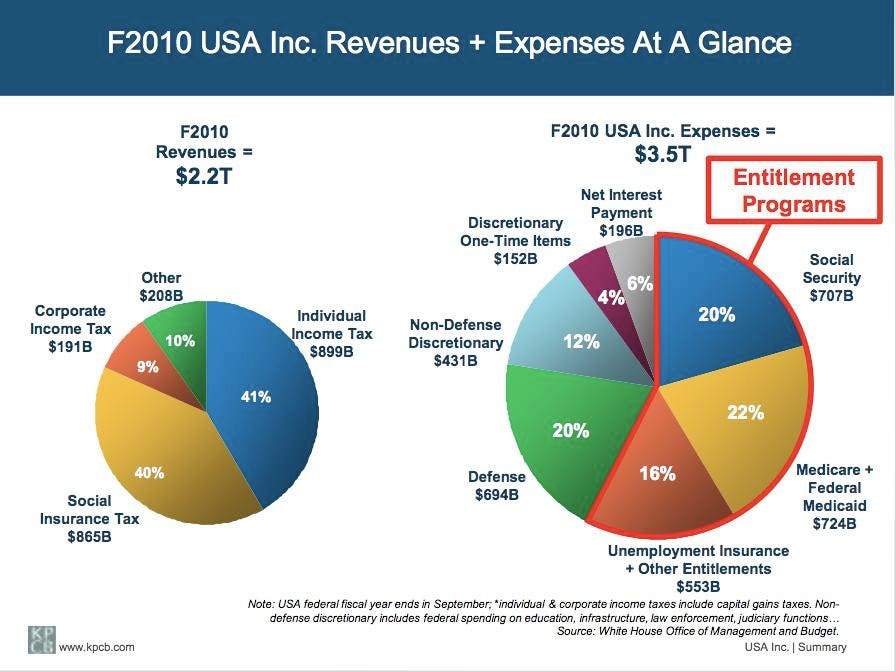 As the graph indicates, in fiscal year 2010, 58% of national government spending went for entitlement programs. Unless we get a handle on these expenses, things will only get worse.

Things will get worse partly because of demographics. USA Today reports that

The first of 77 million Baby Boomers turn 65 this year and qualify for Medicare. Enrollment will grow from 48 million in 2010 to 64 million in 2020 and 81 million in 2030, according to Medicare actuaries. That 33-million increase in the next 20 years compares with 13 million in the last 20.


This increase in eligible recipients plus President Bush's prescription drug program has caused a $25 trillion (with a 't') unfunded liability over the lifetime of those currently in the program. That amounts to $212,500 per household.

Additional liabilities are as follows:

All told, under current legislation, USA Today analysis estimates that taxpayers are on the hook for the $61.6 trillion in unfunded obligations that amount to $527,000 per household. This is an ugly picture.

It is also what happens when a nation mistakes something that is nice to have for a right and confuses forcing someone else to pay for that something with charity.
Posted by Shawn R at 2:17 AM