Look what has happened to the U.S. poverty rate since 1959: 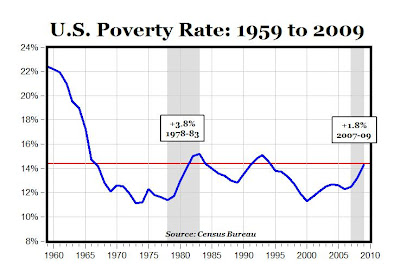 Since the late 1930s there had been a general decrease in the percentage of U.S. citizens living in poverty which continued through the late 1960s. The uninterrupted decline halted in 1969 and bottomed out completely at around 11% in 1973.

It is ironic that it was in 1968 when President Johnson launched his war on poverty. It was Johnson's "Great Society" legislation that put in place the poverty entitlement programs that continue today. That was when the government committed itself to subsidizing those who earned lower incomes. Those subsidies created an incentive to remain poor. Not everyone, of course, decided to quit their jobs and live on the dole. The poverty rate did not increase to 100%. However, it did stop its general decline and has hovered around 13% ever since.
Posted by Shawn R at 2:12 AM