Joseph Salerno on the Fed's Two Options: Bad and Worse

Joseph Salerno, one of the most insightful economists working today, was quoted in the New York Post about our current inflation and the Fed's monetary policy. The author of the Post story understandably only had room for a small portion of what Salerno said. Salerno posted his full remarks on the Mises Blog and they serve as a good, concise discussion of the current economic state of affairs and the Fed's policy options.

The bottom line is that we are experiencing a false, inflation-driven recovery. When it is finally unable to ignore the signs of inflation any longer,the Fed will raise interest rates and terminate QE2 (scheduled to end this month). At that point the economy will begin to stagnate like the Japanese economy of the 1990s and we will face a protracted period of extremely slow growth and high unemployment.

This might explain why, according to economists at the Council of Foreign Relations, we households are still so heavily laden with debt. 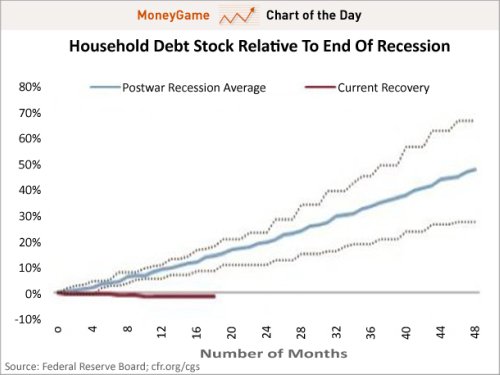 Alternatively Salerno notes that the Fed could merely keep the inflation going, which would be much worse. As he says, "If the Fed persists in its inflationary policy then it will usher in galloping inflation like the U.S. experienced in the 1970s combined with high unemployment–and I do not think that price and wage controls will be too far behind."
Posted by Shawn R at 2:25 AM