Housing prices appear to be heading for a downward slide again. The most recent Case-Shiller index released yesterday reveals that housing prices in its 20-City Index rose less than 0.6% in September, which was below what was forecast. The U.S. National Composite Home Price Index actually fell. This has led Business Insider to proclaim that "The Housing Double Dip is Here." Its chart of the day does not paint a pretty picture for those hoping that housing prices will soon return to their relentless march onward and upward into the profitable light. 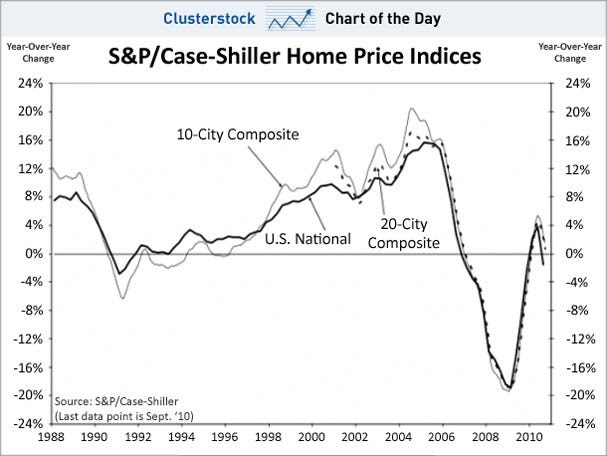 This is another illustration of the futility of trying to fix our economic problems by artificial means. There were good reasons for such a sharp fall in housing prices from 2005 through 2008. The Federal Reserve inflated a housing bubble. Way too many houses were built compared to demand. For the housing market to clear, prices had to come down and they did. So much for prices being sticky downward.

The government thought that one thing that could get the economy back on firmer footing would be for the housing market to stabilize so that home prices would begin rising again. They passed a large tax credit designed to provide an incentive to buy a house and it worked--as these things do--for awhile. As soon  artificial stimulus runs out, however, things again begin to reflect economic reality. Trying to "jump-start" the housing market via tax credits has not worked. Trying the "jump-start" the entire economy through fiscal stimulus or monetary inflation has not worked either. What is needed is the building up of our capital stock and investing that capital wisely. This requires that the state get out of the way, letting capitalists and entrepreneurs do their work.
Posted by Shawn R at 2:00 AM