What We Need Now Is Sound Money 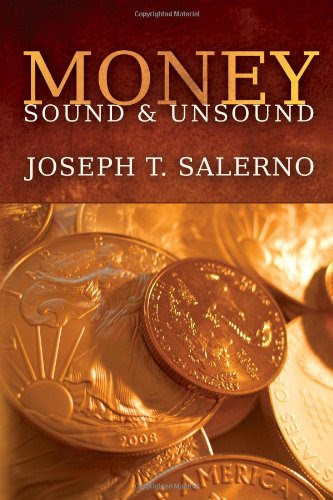 That is the opinion of John Cochran and I could not agree more. The Great Recession is the logical consequence of a decades long process departing from sound money. The reason we are still muddling through with very high unemployment is we have refused to move back toward sound money.

Joseph T. Salerno's work on monetary economics is what one could call the gold standard of monetary theory (if people would recognize the metaphor anymore). Cochran justifiably calls Salerno, "today's leading monetary scholar in the tradition of Mises and Rothbard." The collection of his essays on monetary theory and policy, Money, Sound and Unsound is a intellectual tour de force. I received my own copy a few weeks ago and could not be more pleased. I had read a number of the essays before in their original format, but some were in relatively hard-to-obtain journals and it is wonderful to have them all in one place.

Salerno understands the nature of money as a medium of exchange. His analysis of the gold standard from the perspective of both theory and history demands careful attention. This book also includes an excellent essay documenting the link between war finance and monetary inflation. He explains the economics of international monetary systems, and is masterful explaining the nature and consequences of inflation as well as the various forms and consequences of deflation. He especially notes that we have no need to fear deflation resulting from the liquidation of unsound investments. Would that Ben Bernanke would understand this.
Posted by Shawn R at 9:48 AM