When the Hyperinflation Crack-Up Boom Comes, It's Often Back to Barter

Ludwig von Mises in his essay on monetary economics, "Stabilization of the Monetary Unit--From the Point of View of Theory" posited one possible terminal point following a monetary authority's attempt to prolong a boom with ever increasing inflation to be the crack up boom.  That is the boom to end all booms in that it is the result of hyperinflation where the monetary system cracks up and breaks down. The necessary end result is hyper inflation. Hyper inflation destroys the purchasing power of money, becomes worthless in exchange. and, hence, ceases to be used. Society then either must adopt another currency or devolve back to barter, in which producer or consumer goods are exchanged directly for other producer or consumer goods.

The New York Times reports that this has happened in Zimbabwe. The story focuses on a hospital that is now accepting payment in peanuts which its grinds into peanut butter that it feeds to its patients. As the story reports


The hospital, along with countless Zimbabweans, turned to barter in earnest in 2008 when inflation peaked at what the International Monetary Fund estimates was an astonishing 500 billion percent, wiping out life savings, making even trillion-dollar notes worthless and propelling the health and education systems into a vertiginous collapse.

Below is a barter exchange rate list for different goods. 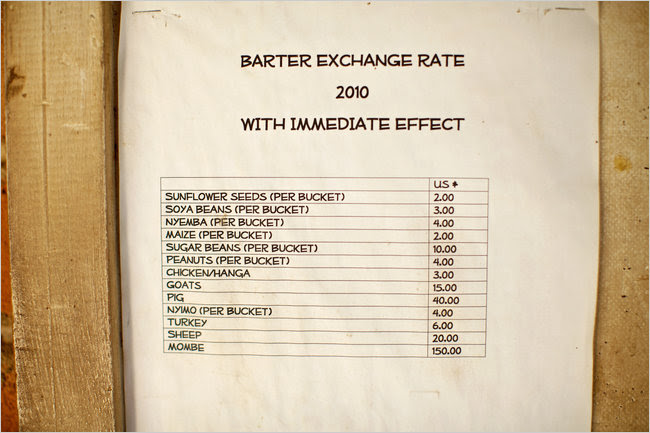 The exchange rates are denominated in dollars, because last year Zimbabwe did away with its currency and replaced it with the U. S. Dollar. You know things are bad for your currency when you want to adopt the U.S. Dollar in its place!

As the report indicates, thoroughly debasing the general medium of exchange can have grave consequences.


For most of the past year, the hospital did not have enough money to stock blood. Ms. McCarty said women who hemorrhaged after giving birth or experiencing ruptured ectopic pregnancies were referred to bigger hospitals, but often they had no blood either. Eight women died, she said. Just recently, the United Nations has begun paying for blood at the hospital to improve women’s odds of surviving.